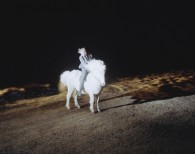 The project “Visual narratives: European borderlines” engages 12 young photography artists from Latvia, Turkey, Iceland, Portugal in a documentary exploration of the four countries representing geographical borders of Europe. The participants (3 from each country) undertook personal projects – documentary and personal studies of the ‘borderlines’ between August 2011-July 2012 in their own and a resident country, followed by a joint editing workshop in Çanakkale in mid-July. The work is supervised by experienced documentary photographers Vanessa Winship and George Georgiou, and supported by country tutors/coordinators. The result will be summarized in 12 individual projects as well as a joint visual narrative – documentation of “European Borderlines”.

The final output will represent an exploration of differences and similarities, contrasts and likeness, frontiers and borderlines, both geographical and human – a visual narrative of the countries and people standing ‘on the edge’ of Europe.