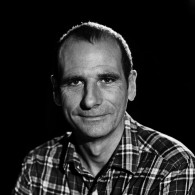 Eric Bouvet was born in Paris in 1961. After studying fine arts and graphics he started his photography career in 1981. He was an official with Gamma, a French photo agency, in the 1980s and started working independently in 1990. He acquired international fame with his images of salvage work following a volcanic eruption in Omeyra, Colombia. Bouvet has photographed clashes in Afghanistan, Libya, Iraq, Iran, Chechnya, Sudan, Somalia, Lebanon, the former Yugoslavia, Israel, Northern Ireland, Suriname and Burundi. He has captured many important events, from the funeral of Ayatollah Khomeini in Iran to the massacre in Tiananmen Square, from the fall of the Berlin Wall to the release of Nelson Mandela. He has recorded the lives of police officers working in the suburbs of Paris, captured the journey of children undergoing cancer treatment and gone into Russian prisons. His work has been published in many international journals, including Time, Life, Newsweek, Paris Match, Stern and The Sunday Times Magazine. Bouvet has spearheaded photography companies for NGOs and charity organizations and has won the World Press Photo contest five times, in addition to many other awards such as the Visa d’Or award, the Paris Match Award and the Bayeux-Calvados Award.