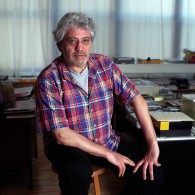 Robert Pledge was born in March 1942 in London, UK, and moved to Paris, France at the age of ten. A student of West African languages and anthropology, he found his way into journalism as a specialist in African affairs. In 1970 he coordinated a daring trip in Africa into Libya and Chad with the late photographer Gilles Caron and filmmaker-photographer Raymond Depardon. Later that year he became an editor of the French visual arts magazine Zoom and three years later, director of the New York office of the picture agency Gamma. In 1976 he founded in New York the international independent picture agency Contact Press Images with American photographer David Burnett.

He has curated major photographic exhibitions throughout the world. He has sat on many prestigious international juries including that of the World Press Photo Foundation and the W. Eugene Smith Fund. He has also edited highly acclaimed books, including: Red-Color News Soldier (Phaidon) with Chinese photographer Li Zhensheng, and 44 Days: Iran and the Remaking of the World (Focal Point/National Geography), a text and photographic memoir of David Burnett’s photographs on the 1979 Islamic Revolution, he co-authored with the photographer and writer Jacques Menasche. Both books received the “Olivier Rebbot Award” from the Overseas Press Club of America, in 2004 and 2010 respectively. He commutes between Paris and New York, and is a frequent visitor to China.