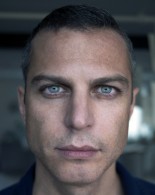 Phillip Toledano: I was born in 1968 in London, to a French Moroccan mother and an American father.

I am a conceptual artist: Everything starts with a idea. The themes of my work are primarily socio-political, although lately I’ve strayed into the deeply personal.

The idea determines the execution. Consequently, my work varies in medium, from photography to installation, sculpture to painting.

My first book, entitled “Bankrupt”  (Photographs of recently vacated offices) was published by Twin Palms in 2005.  The second book, ‘Phonesex’ (again by Twin Palms) came out in December of 2008.  My third, Days with my father, was published by Chronicle, and was released in June of 2010. The rights for ‘Days’ have been optioned to be a movie.  A fourth book: ‘A new kind of beauty’ (Portraits of people who have recreated themselves through plastic surgery) was published by Dewi Lewis, and released in the autumn of 2011.

2012 Perth Centre for Photography, A new kind of beauty

2011 Kunstverein Wiesbaden, Days with my father

2009 The center for photography at Woodstock, America the gift shop

2006 Colette, The Other side of America

2012 Ullens center for contemporary art, Bejing, Beyond words: Photography in the New Yorker

2011  Winkelman gallery, Corporations are people too

2010  Künstlerhaus Bethanien, All my lovin’

2008  Orange County Center for Contemporary Art, Just how does a patriot act?

2008  Photobiennale of Thessaloniki, Places and manners of worship

The Houston museum of fine art

The British Journal of Photography