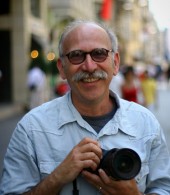 Ken Light is a social documentary photographer whose work has appeared in books, magazines and exhibitions. His most recent book Coal Hollow (University of California Press) was published in 2005.

His last photo book, Texas Death Row (1997) is a look at life inside the death house as the condemned wait to be executed in Americas largest and most active Death Row. This work was published in NewsweekMagazine (6 pgs), Paris Match (France — 8 pgs), Tempo(Germany — 6 pgs), London Telegraph, Nieuwe Revu(Amsterdam — 6 pgs) and in Japan, Korea, Holland, Denmark, Mexico, Spain, Italy as well as on Newsweek Online, and MSNBC.com Online.

He is also the author of Delta Time published in 1995 by the Smithsonian Institution Press. This book looks at rural Black poverty, cotton and the southern landscape. Delta Time has 104 photographs and an essay by legendary civil rights organizer Bob Moses. This work has been published in VSD in Paris, Granta, the London Independent, Spanish Elle with Walker Evans and in the Academy Award nominated documentary film Freedom on My Mind.

His other books are To The Promised Land (Aperture 1988),With These Hands (Pilgrim Press 1986), and In the Fields(Harvest Press 1982), which examine the lives of farm workers and their journey from Mexico illegally to the United States.

A text, Witness In Our Time: The Lives of Social Documentary Photographers was published by the Smithsonian Institution Press in October 2000. It is in its third printing and has been adapted by numerous University and College documentary programs as well as being translated and published in Turkey.

He has exhibited internationally in over 175 one-person and group shows, including one person shows at the International Center for Photography, S.E. Museum of Photography and Smith College. His work is part of numerous collections including the San Francisco MOMA, the Houston Museum of Fine Arts, the International Center of Photography and the American Museum of Art at the Smithsonian. He has received two National Endowment for the Arts Photographers Fellowships, the Dorothea Lange Fellowship and a fellowship from the Erna and Victor Hasselblad Foundation as well as a grant from the Soros Open Society Institute. Mr. Light’s numerous other awards include the Media Alliance Meritorious Achievement award in photography, the Thomas More Storke International Journalism Award and Judges Special Recognition (Cannon Photo Essayist) in the 1991 University of Missouri/NPPA Pictures of the Year competition.

He is an adjunct Professor and curator of the Center for Photography at the Graduate School of Journalism at the University of California Berkeley, and has taught workshops at the ICP in New York City, The Missouri Photo Workshop and in the School for Photographic Studies in Prague and Baltimore. He is a founder of the International Fund for Documentary Photography which awarded grants to photographers worldwide, as well as founder of Fotovision. His freelance work has been represented by J.B. Pictures, SABA Press Photos in New York. and Contact Press Images in New York.