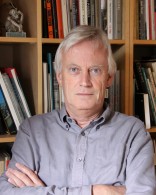 PORTFOLIO REVIEW | LECTURE; Publishing in Print in a Digital Age

Dewi Lewis established his publishing house in 1994. Internationally known, its authors have included photographers such as Martin Parr, Simon Norfolk, William Klein, Frank Horvat, Paolo Pellegrin, Sergio Larrain and Bruce Gilden. He works in close collaboration with a number of European publishers and is a founding member of The European Publishers Award for Photography, now in its 19th year.

He has acted as Jury member for several major competitions and as a portfolio reviewer at innumerable international photography events including Fotofest, USA; Lodz Festival, Poland; PhotoEspana, Spain; Review Santa Fe, USA. He was a ‘Master’ for the 2009, 2010 & 2011 World Press Photo Joop Swart Masterclasses. As well as his own book, Publishing Photography, he writes occasional texts on photography and has curated exhibitions including a survey show of the famous UK magazine, Picture Post, for the 2010 Atri Festival.